Please join your fellow Wharton Club of the National Capital Region members for a special exclusive opportunity: we have 100 tickets to visit the The National Museum of African American History and Culture! 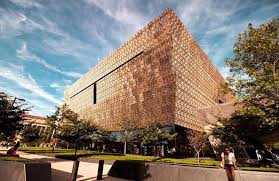 If you have tried to reserve tickets before without success or want an opportunity to return, this is your chance to visit what the NY Times called  “a data-packed, engrossing, mood-swinging must-see”.

Given the Museum's popularity, WCNCR members can sign up for 1 ticket each to join us.  If fewer than 100 members have signed up a week before the event, members will then be invited to reserve additional tickets.

Let's go together and enjoy!

FYI - We will meet at the Group Entrance on Madison Avenue (the Mall side) 15 minutes before our 1 p.m. entry time.  Everyone must enter together.

For more details from the NMAAHC to the WCNCR about our visit click here.

For more information about visiting the NMAAHC and FAQs click here.

Not a Member Yet but like to join us? Please click here to become a member of the Wharton Club of the National Captial Region and start enjoying all of the benefits!

The National Museum of African American History and Culture

The NMAAHC is a Smithsonian Institution museum located on the National Mall in Washington, D.C, and was established in December 2003 and opened in September 2016 in a ceremony led by then President Barack Obama.

Early efforts to establish a federally owned museum featuring African-American history and culture can be traced to 1915, although the modern push for such an organization did not begin until the 1970s. After years of little success, a much more serious legislative push began in 1988 that led to authorization of the museum in 2003. A site was selected in 2006, and a design submitted by Freelon Group/Adjaye Associates/Davis Brody Bond was chosen in 2009.

Construction began in 2012 and the museum completed in 2016.  The NMAAHC proved immediately popular, ranking as the fourth most-visited Smithsonian museum in its first full year of operation. The museum has more than 40,000 objects in its collection, although only about 3,500 items are on display. The 350,000-square-foot (33,000 m2), 10 story building (five above and five below ground) and its exhibits have won critical praise.