Professor Michael Weisberg, Director of Post-Graduate Programs at the Perry World House, and Perry World House Visiting Fellow and Penn Alumna Lolita Jackson talk about the impacts of climate change at the municipal level. While vastly different in scale, New York City and the Galápagos Town of Puerto Baquerizo Moreno (population 8000), the towns in which they have worked for many years, face similar threats: sea level rise, increased flooding from storms, and population growth. They also face the challenge of having their needs prioritized in the national and international arena. Join us for a lively conversation about climate change and these two cities. 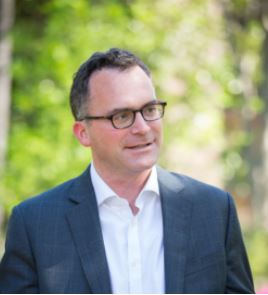 Michael Weisberg is Senior Faculty Fellow and Director of Post-Graduate Programs at Perry World House, as well as Professor and Chair of Philosophy at the University of Pennsylvania. He serves as Editor-in-Chief of Biology and Philosophy, advisor to the United Nations Framework Convention on Climate Change’s Nairobi Work Programme, and directs Penn’s campus-wide transdisciplinary research in Galápagos. He is the author of Simulation and Similarity: Using Models to Understand the World and Galápagos: Life in Motion, as well as a contributing author to the Intergovernmental Panel on Climate Change's 6th Assessment Report.

Lolita Jackson is the Executive Director of Communications & Sustainable Cities for Sustainable Development Capital, LLP, a London-based climate finance and investment firm. Lolita previously worked for the NYC Mayor’s Office for 15 years in a variety of roles, and until March 2021 she served as the Special Advisor for Climate Policy & Programs, where she was the climate diplomat and lead for the administration regarding global work on divestment and climate finance. Prior to her appointment to that role, she was Deputy Director of External Affairs for the Housing Recovery Office, Director of Outreach for the Special Initiative for Rebuilding and Resiliency, lead for operational city agencies for the Second Avenue Subway and Barclays Center, and Manhattan Director of Community Affairs.